At the foundation of the success of our business, and our clients’ businesses, is the success our team members. Our team is made up professionals with unique experiences in and perspectives on the automotive industry, and we think our team members have insights to share that we can all learn from. This week, we’re celebrating John Evans, who will be retiring from his role as a VinSolutions corporate trainer at the end of the month.

In 2009, after working in every position from salesperson to GM in several dealerships, I heard about VinSolutions through some friends. I sent my resume in, and two weeks later I was working for VinSolutions.

How has VinSolutions changed in the eight years you’ve been a part of the team?
It has blown up so much. When I started here, VinSolutions was a start-up. There were only half a dozen trainers, and we had four-digit account numbers. The business has just grown tremendously. Though all the changes though, VinSolutions has been a fantastic company to work for.

How has the automotive industry changed throughout your career?
I used to think back in the old days – in the 60s, 70s and 80s – that our transportation would look like The Jetsons. We haven’t gotten there yet, but I still see it happening. Cars are still moving on tires and wheels, but everything else about them is changing. It’s amazing how many computers are in today’s cars.

Technology and the internet have changed dealerships. I remember in the early 90s when this thing called “the internet” was initially explained to me, and people started talking about customers buying cars from their homes. I thought at the time the internet would help buyers get smarter and dealers who don’t buy into digital might as well close their doors. I think a lot of what has made VinSolutions so successful is its quick adoption of digital technology.

What has been the most challenging part of your career?
I have had three “what did I get myself into” moments throughout my career.

The first was when I joined the Marine Corps. All of a sudden everybody’s hair was cut off and we all looked the same, and I heard vulgarity like I never had. But I made it.

The second was when I got in the car business. Working all those long hours I wondered, “What have I done?” But I stuck with it and made good money.

The third was when I joined VinSolutions. Walking in that first week I was asking myself if I had just made a big mistake. I’m a car guy, and car guys aren’t into tech. But I was surprised to find out how easy it is to love once you get into it.

What are your plans for your retirement?
Retirement has never been part of my vernacular, but I’m looking forward to seeing what it tastes like. I don’t think I’ll be “retired” long, but I’ll be riding my Harley a lot. 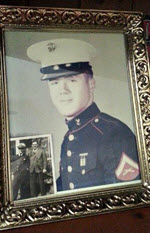 John Evans poses for a portrait during his time in the Marine Corps. He served from 1961 to 1967.

Submit your email to receive updates on VinSolutions Resources.

Great! We're looking forward to seeing you there. Don't forget to book a demo with us to learn about all our new products and features.

Don't forget to book a demo to see all our latest products and features. Book Now! We'll see you at NADA 2023!

That's OK! Still want to learn about our new products and features?